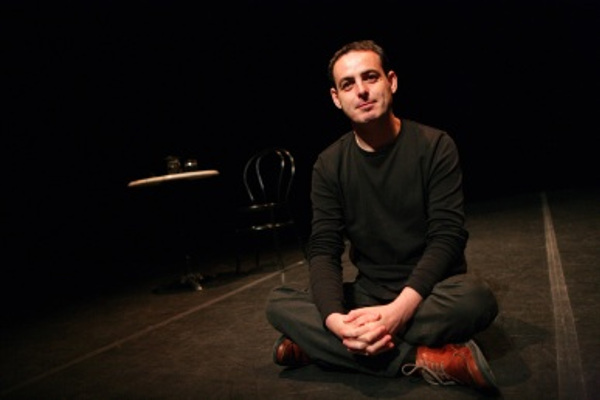 Pablo Albo told his first story professionally in 1994. On that very same day he got into his car and began to clock up the kilometres.  Here one day, there the next. From A Coruña to Gran Canaria, from Caceres to Girona; there are few provinces that do not have some corner where he has told stories.
He never stops! So many kilometres!

And then there's the plane: To Australia no less, and to Brazil, and to France, Venezuela, Belgium, Italy, Mexico, Switzerland, Greece... It's a good job that wherever he is he sometimes smiles for no apparent reason and says "imagine" ... and begins to invent a story. If he likes it, it takes root; and if it takes root, he goes with it; and if he goes with it, he pursues it... It is certain that he will end up telling it in public in his own inimitable manner; "Sardonic" was how the deputy mayor of Almendralejo described it.

Sometimes as if by accident. "You don't know what is being made up on the spot", said a surprised woman from Valdemoro.

He takes you to and fro, and lets the words rock you. They come out wherever they want. He plays with them: What if a man from Teruel precipitated his precipitation over the precipice... and ended up dead. What if the body was present but seemed absent...

All with a passion yet without compassion. You might be laughing but suddenly it becomes more intimate and he brings you memories of that time when... or when...

And up close, ah, yes, very close. So close it seems he wants to whisper in your ear.