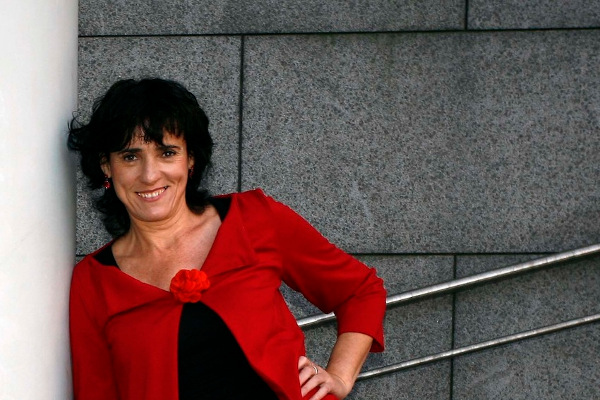 I was born in 1966 and like a good girl (but not a goody goody), I liked playing with the stories that I came up with, making puppets, drawings, murals by telling them or acting them out.

Much later on, in 1996, I had the chance to be involved in the creation  of  the oral narration group “A la Luz de las Velas”.(“By Candlelight”)  I never guessed then to what extent stories would affect me.

Thanks to this encounter (or reencounter)  I saturated myself in stories, songs and legends to satisfy the thirst that I had had since I was a little girl. It was later that I found I enjoyed making them my own and passing them on.

From then on I have enjoyed sharing stories that have touched me. I enjoy making the young and not so young audience participate in the story, talking and singing with them, looking for their complicity because I know that only by telling the stories with them, can the story flow and that also through play you can tell stories, sing and breathe freely.

Generally, when I tell a story, I prefer to use just the spoken word, but sometimes I am accompanied by those ‘little boxes of surprises’, which are books, especially when they have illustrations which are worth savouring and sharing. As I like drawing, on occasions I cover different surfaces with the images I see in my head when I’m telling a story and I play with them during the session.

I would also like to say that I am a dedicated mum, which allows me on a daily basis to learn even more about telling stories so people listen, and about listening so that people tell me stories.

And so I go on, feeling lucky to be able to live for and from storytelling.