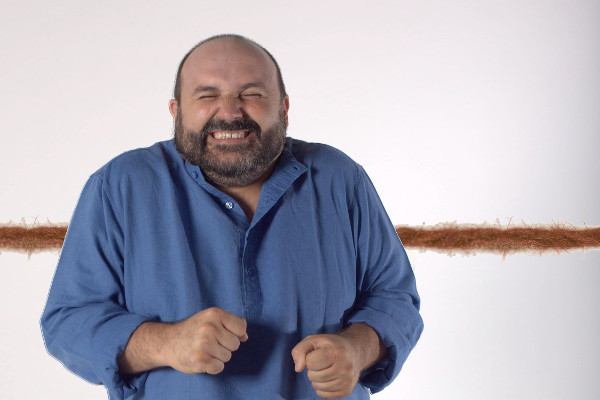 In 1994 FÉLIX ALBO put himself in front of an adult audience and he was hooked. Commitment, effort and continuous research, training and creation have made him one of the most relevant artists in the art of the spoken word.

With his work he has appeared at practically all the national festivals such as Agüimes, Narón, Guadalajara or Cuenca, and the international ones because he has also been to countries like Algeria, Bolivia, Colombia, France, Italy, Morocco, Mexico and Venezuela.

It’s unusual if he hasn’t been invited to a place twice, and that, in the arts world, is a good sign.

FÉLIX ALBO bases his work on the word, on its strength, and its capacity to transform the audience. He uses visualization, irony, pointblank sarcasm and a developed humour that has nothing to do with the vulgar or the coarse.

But not only that. This artist’s shows take the public on an emotional rollercoaster which goes from delirious laughter to a heavy silence in the space of seven words.

He has a special ability to beguile his listeners and invite them on the journey he proposes in each one of his different shows. His work is based on exacting subtlety,  balanced delicacy, and on the efficient neatness of simplicity. Maybe that is why the effect is so much more surprising. His work is always thought provoking, he arouses emotion, makes you laugh, reflect and debate.

What is art for, if not for this?