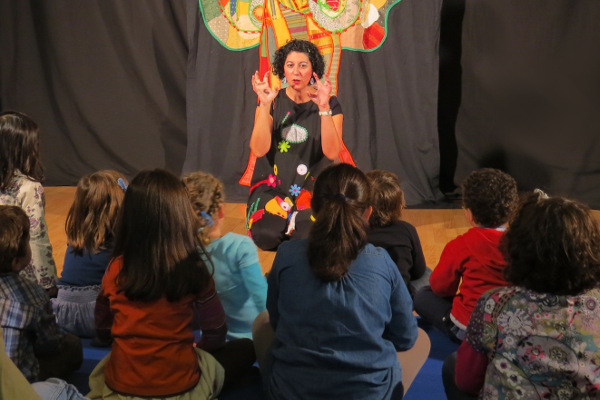 An actress with a “commedia” essence, a storyteller of gesture and word, a buffoon, a clown with or without a nose...

When she discovered the Commedia dell´Arte she felt at home, she caught the spirit and immersed herself in its spicy "putanesca" and smooth "carbonara" waters, she found her artistic family, masks, which today still form the frame which surrounds her world, the incomparable frame of the human being...

She learned her trade as those before, on the boards, with the master TABLOSVKI as her mentor.

Generous and energetic on the stage, she feels the audience like a pregnant woman feels her child.

She enjoys her work like the fish in the sea and the birds in the sky. More than an artist she feels like an artisan, perhaps because apart from being on the stage she sews, designs, sticks, pricks herself with needles, writes, redecorates, reinvents the world, plays with words and with colours.

She shows respect while mocking, like a jester without a king, her condition as a human... Oh, my sister!

She intertwines, interweaves and entertains with her stories and she opens the doors to her worlds, her images, in order to be less alone in her vision, her madness, in this crazy world which keeps on turning... "Turning, the world is turning...”

Around 92 in the last century this oral narrator, or storyteller as she likes to be called, began telling stories.  Following a long background as an actress in theatre for children, she entered the world of storytelling by combining the stage with the storyteller's semicircle.  Both disciplines would go along hand in hand until the present day.

She works for audiences of all ages telling, weaving, adapting and adopting stories from across the oceans or from around the corner, taking them all over Spain to various environments (libraries, schools, nurseries, theatres...) and situations (fairs, festivals, cultural weeks...).